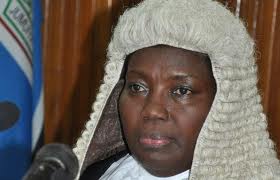 Following the decision by the Supreme Court to stay the expulsion of the four rebel NRM MPs from Parliament, the Speaker of parliament Rebecca Kadaga has announced that the MPs are now free to participate in all parliamentary activities.

She says the MPs;Theodore Ssekikubo, Barnabas Tinkasimire Muhammad Nsereko and Wilfred Niwagaba are also entitled to all allowances and emoluments, altering her earlier communication barring them from accessing parliament precincts and related privileges.

The Supreme Court today ordered the Speaker of Parliament to reinstate the MPs and the Electoral Commission not to hold any by-elections until their main application is disposed of by the same court.

A panel of five judges including John Wilson Tsekooko, Stella Arach Amoko, Banjamin Odoki, Galdino Okello, and Christine Kitumba unanimously agreed that the expelled MPs be allowed back to Parliament to discharge their duties.