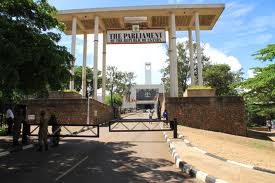 The body of the former disaster preparedness minister Dr. Stephen Malinga is lying at Parliament.

It was received by the deputy speaker, Jacob Oluanya and Defense minister Dr Crispus Kiyonga.

Several government officials, other dignitaries and members of the public are expected to throng parliament to pay their last respects to the fallen politician.

The body will then be taken to the chambers at 2.00PM for a special sitting where fellow legislators are to pay tribute.

He is to be buried at his ancestral home in Butebo, in Palisa District on Thursday. Malinga died on Thursday last week after he collapsed at his home in Pallisa.

At the time of his death he was the MP for Butebo County, having served in the same position for seventeen years.