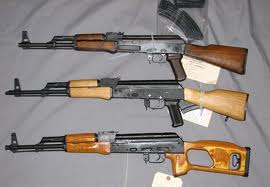 A joint force of the Police and UPDF has intercepted three men at Mbale Taxi Park as they attempted to smuggle fire arms into Kenya. The trio has been identified as Stephen Wakyaya, Charles Matomei and David Oketcho.

They are said to have been transporting the arms using a Gate Way bus with a Kenyan registration number KBD 281P.

The UPDF third division spokesperson Lt. Jimmy Denis Omala, says these had hidden the arms in a bag of bananas.

He says the trio is now held at Mbale central police station as investigations go on.