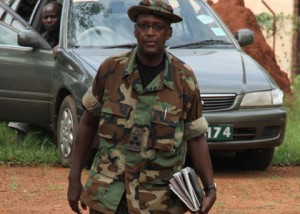 The fate of embattled former spy Chief Henry Tumukunde will be decided next month.

The General Court Martial set April 4th to deliver judgment on whether or not to convict him.

This is after the judge advocate Maj Augustine Bwegendaho advised court to critically evaluate available evidence before making a final decision.

Brigadier Tumukunde is accused of spreading harmful propaganda while on a radio talk show in 2005.

Tumukunde also faces another charge of conduct prejudicial to order and discipline.

He is also said to have attacked the current government for alleged failure to promote what it stood for when it opted for the bush in 1986.

He appeared today before a panel of seven members chaired by Brigadier Fred Tolit.

Earlier, his lawyers led by Macdusman Kabega called for his acquittal on grounds that their client was a member of parliament representing the army and made the remarks in that capacity.

However, prosecution led by Capt. Fredrick Kangwana insists that  Tumukunde be convicted on grounds that it had been proved beyond reasonable doubt that he committed the said offences.

By Ritah Kemigisa The Ethics and Integrity minister Lilly Akello has welcomed the latest motion on moral decay adopted by parliament saying it will go a...