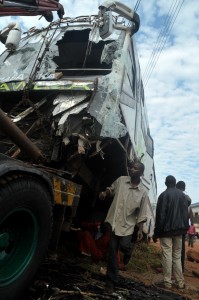 Two people have died in an accident that occurred early this morning (6:30am) near Kyambogo along the Kampala Jinja road.

According to the Division Police Commander Jinja Road police station, Wesley Nganizi the two died on the spot.

The accident involved a Nairobi-bound bus belonging to the bus company Modern Coast Ltd bearing the registration number KBT 950J and a Toyota Nadia that was heading into the city.

The dead were occupants of the Nadia. The other two sustained serious injuries and have been rushed to Mulago hospital for treatment.

Nganize says the driver of the Nadia lost control and rammed into the bus which then veered off the road, hitting a stationed truck.

The actual cause of the accident is still being investigated.