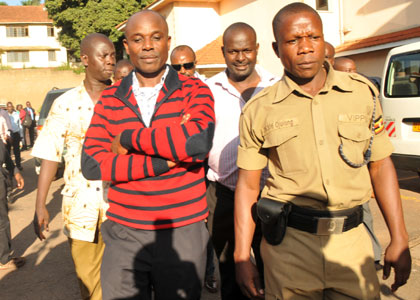 City Businessman Hassan Basajjabalaba has been sent back to Luzira prison, pending the ruling on his bail application.

He appeared before the Anti-Corruption Court for hearing of his bail application, to which the Prosecution strongly objected.

Basajjabalaba applied for bail on grounds that it is his constitutional right and that his sureties are substantial.

He also said that he had a permanent residence and therefore cannot violate bail conditions.

Led by Lillian Omara, the prosecution has opposed the bail application saying that Basajjabalaba has on many occasions failed to obey police summons and that it took them one year to finally have him arrested.

Omara argued that there is a strong possibility of the tycoon violating his bail conditions and failing to show up for trial.

The Chief magistrate Irene Akankwansa has sent him back to Luzira unti tomorrow when she will make her ruling on the application.

He is alleged to have conspired with his younger brother Muzamir Basajjabalaba, the directors of HABBA Group conspired to evading taxes amounting to 20m shillings between 2010 and 2011.

The duo is also accused of forging a consent judgment in October last year, purporting to have been entered into between HABA and the Attorney General, agreeing that the payment of 142bn shillings would not be subjected to any taxes.

He denied the charges returns to court tomorrow for the ruling.