Record Africa Cup of Nations winners Egypt beat the Uganda Cranes by a solitary strike in the 87th minute in their second match of the 2017 edition at Port Gentil Stadium.

After defending gallantly for 87 minutes, Uganda Cranes were caught on the break and succumbed to Abdallah El-Said strike in the 88th minute. 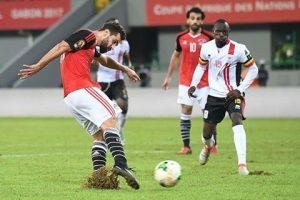 The Pharaohs had a lion’s share of the ball possession but could not break down the tactically organised Cranes especially in the first half.

The loss means Uganda Cranes have no chance of progressing in the tournament at they are officially eliminated with one game to play against Mali.

On the hand, Egypt need just a draw from the Ghana game to qualify for the quarter finals regardless of the result between Uganda and Mali.

Over 30 shisha smokers arrested in Kampala