Ugandan soldiers on foreign mission to be registered 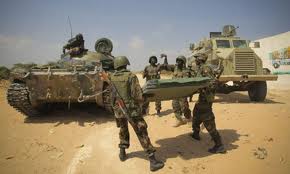 Ugandan troops on peace missions abroad will be registered.

This has been revealed by the project manager of the national ID exercise Col Stephen Kwiringira.

This comes as politicians challenge government to consider registering Ugandans in diaspora a proposal rejected by government.

Now Col Kwiringira says for those soldiers on official duty, there will be arrangements to have them registered since their citizenship is not in question.

Earlier internal affairs minister Gen Aronda Nyakairima challenged Ugandans in the diaspora to take advantage of the continous registration and come back to take part in the exercise, if they would like to participate in the 2016 general elections.