The Uganda National Examinations Board (UNEB) has registered better performance in the 2018 Primary Leaving Examination compared to the previous year.

Releasing the results at the office of the president this morning, the UNEB Executive Secretary Daniel Odongo has said out of the over 655,000 candidates who sat for the exams, over 599,000, which accounts for 91.4% have passed in various divisions.

Odongo says that a candidate is deemed to have passed if he or she obtained grades 1, 2,3 or 4 and such candidates qualify to register for any post primary examination.

For parents and guardians who wish to access their children’s results via the SMS platform simply TYPE: PLE followed by the candidates’ full INDEX NUMBER then SEND TO 6600.

Meanwhile KFM has spoken to some of the pupils from different schools including Silver Spoon P/S, Kampala Parents P/S and Namilyango Junior Boys’ P/S who could not hide their excitement. Jasmine Akampiire, a pupil at Kampala Parents’ School who got 4 aggregates attributes her success to the Grace of God and hard work. While Elizabeth Atukunda says she could never have managed to get the four aggregates on her own without the support of their teachers. With aggregate 9, Derrick Aturinda says he all set to chase his dream of becoming a mechanical engineer. For Alvin Rwebembera from Namilyango Junior Boys’ School, his aggregate 12 result has come as total disappointment because he worked so hard and expected better results. 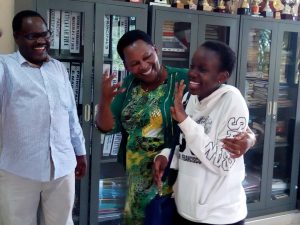 The Uganda National Examinations Board has also announced that results of 3,500 pupils have been withheld.

Mr.Odongo said that although the examinations were conducted smoothly, cases of malpractice were reported especially by external assistance given to candidates by third parties inside the examination rooms.

Odongo also notes that parents from the above schools in Bundibugyo district paid 50,000 each to facilitate the malpractice and such cases await court action.

He however says that all candidates whose results have been withheld will be accorded a fair hearing by the board’s examination security committee and those who will be cleared will have their results released later.