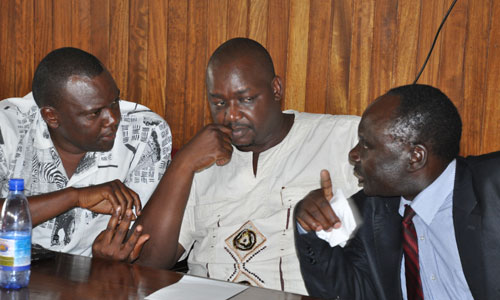 A group of UPC Party members opposed to the current leadership have stormed the party headquarters, and announced a full take over.

Led by MPs James Akena, Ayena Odongo and Edward Rurangaranga among others, they forcefully took over a press conference that was being addressed by an envoy in the party president’s office Okello Lucima.

Addressing the press, Rurangaranga announced they will also hold a delegates conference on the 27th of this month, regardless of whether or not it’s approved by Party President Olara Otunnu.

Rurangaranga also announced that the group will now take over the party offices until the delegates’ conference is held and new leaders are elected.

He says they have powers as founders of the party to take action to redeem it.
The members have persistently mounted pressure on party president Olara Otunnu, demanding that he steps down over accusations of mismanaging the party.

Outcry over roads in Karamoja