Wives of police officers in 2nd day of demo 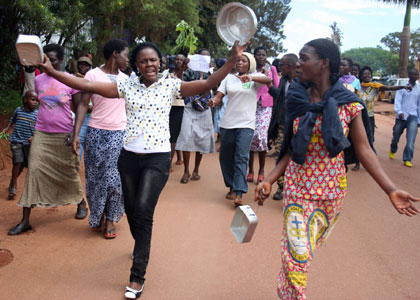 The wives of policemen living in Nakawa, Naguru have hit the streets, demonstrating for the second day running.

The women are protesting against the increased cases of load shedding and delayed payment of their husbands’ salaries.

Electricity at the Naguru barrack was disconnected yesterday as part of the operation against illegal connections countrywide.

The women say that their business ventures require electricity and the disconnection has greatly affected them.

They are also protesting against their poor conditions of living, which they blame on the poor pay their husbands get, in addition to delay in payment.

The police leadership has pledged to ensure that power is re-connected urgently.

They are also appealing for patience on the delay in remitting salaries, which they blame on the public service ministry.