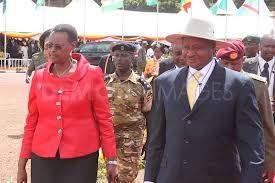 70 women have been recognized by the Presidential Awards Committee, for their contribution in promoting the rights of women.

These have been decorated by the president with different Medals during the women’s day celebrations at Nabinyonyi grounds in Nakasongola district.

Tumwine says other women have received the Nalubale Medal for their contribution towards the country’s political and economic development.

The women’s day celebrations have been attended by several senior government officials and delegations from Australia, Namibia, ambassadors and high commissioners from various countries.

The day is being marked under the theme: “ Gender Agenda, connecting grass root women to development”.

Speaking during the celebrations, President Yoweri Museveni has called for caution in the handling of the controversial Marriage and Divorce Bill.

He says the NRM caucus will meet on Monday to discuss the proposed law further.