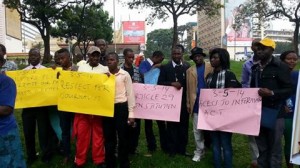 As Uganda marks World Press Freedom Day today, journalists have been urged to hold government accountable to the nation.

The US Ambassador to Uganda, Scott De Lisi says a free, independent and professional press plays an essential role in democratic societies.

De Lisi says the media should be able to disseminate information on all its platforms without fear of harassment or undue restrictions.

He adds that government must protect journalists from physical harm and intimidation, and when journalists are the victims of crimes, governments are responsible for investigating those crimes and bringing the perpetrators to justice.

The European Union Ambassador to Uganda, Kristian Schmidt says media outlets have the crucial responsibility to connect government and the governed.

Schmidt expresses hope that everything possible is done by all stakeholders to ensure the freedom of the Ugandan press.

He also urges media houses to invest in common standards and ethics to further improve the integrity of Ugandan journalism.

The Ambassador also decried increasing violence against journalists, saying it leads to self-censorship, which inhibits true investigative journalism and prevents the media from fulfilling its democratic duties.