Arsene Wenger has taken the blame for Arsenal’s fifth-placed finish last season, admitting that uncertainty in the dressing room contributed to the team’s poor form

‘I had an impact on the season,’because at some stage the players came to see me and said, “What’s going on boss? Where do you go?”

‘You always wonder, “am I the right man to continue to do the job?”
Always when I have faced opposition or unhappiness, I try to focus on what I think is important in the game, work harder and question myself, “what can I improve?” And move on from there. 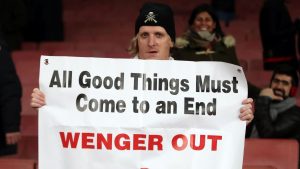 ‘But when it doesn’t happen, you still have to fight and manage to keep your motivation at the highest level.’

Wenger eventually signed a new two-year contract extension at the end of the season, but the damage had been done with the Gunners missing out on top four for the first time in 20 years.

By Luke Mutesasira The Uganda Cranes head coach Multin Sredjovic Micho has named a 33-man squad to start preparations for the forthcoming 2023 Africa Cup of...