Chelsea have signed Kepa Arrizabalaga from Athletic Bilbao for £71m – the highest fee ever paid for a goalkeeper, and a club record transfer.

Kepa, 23, arrives at Stamford Bridge after a release clause in his contract was met, with the deal surpassing Alisson’s £66.8m move to Liverpool.

He has spent the past two seasons in Athletic’s first team, making 53 La Liga appearances, and has one international cap.

He has signed a seven-year contract at the club and replaces Thibaut Courtois,  joins Real Madrid for £35million on a six-year deal. 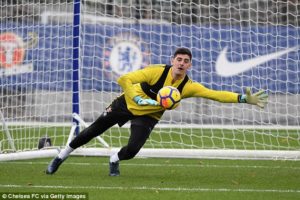 Courtois will complete his medical today and be presented at the Santiago Bernabeu stadium before attending a press conference.

Courtois had gone AWOL from Chelsea, refusing to return to pre-season training in a desperate bid to force a move to the Spanish captial.

Chelsea have since opened disciplinary proceedings against the 26-year-old and are set to fine him two-weeks wages worth around £200,000.

Mateo Kovacic will move to chelsea on a season-long loan once Courtois’ deal has been finalised.

MP's accuse Telecoms of greed for phasing out scratch cards