Chelsea have confirmed a £52million fee has been agreed with Shanghai SIPG over the sale of Brazilian midfielder Oscar.

He will become the most expensive signing by a Chinese Super League club, joining up with former Chelsea boss Andre Villas-Boas in January as clubs in the Far East continue to splash the cash. 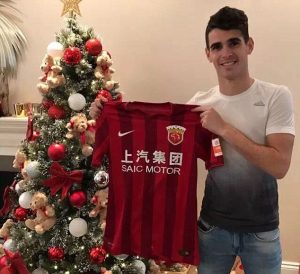 Oscar has fallen out of favour under Antonio Conte at Stamford Bridge, playing 11 matches this season but has not started in the Premier League for the leaders since mid-September

After sealing his move, Oscar wrote on Instagram: ‘I want to thank Chelsea, the owner and all the employees who have made my time at the club so special.

‘A very special thank you to the Chelsea fans you guys are very special and I am honoured to have been a part of your club. We have won some special titles together. The UEFA Europa League, the League Cup and of course Premier League Champions!!! You will always have a special place in my heart.’

Brazil striker Hulk became SIPG’s record signing in June, joining from Zenit St Petersburg for £47m on £320,000 a week — but Oscar will leapfrog his countryman as the club’s top earner.

Oscar will be the latest player with Chelsea connections to play in China, following Didier Drogba, Ramires, Nicolas Anelka and Demba Ba.

By Prossy Kisakye The Democratic Party (DP) wants the president of the Federation of Uganda Football Associations (FUFA), Moses Magogo, to resign for allegedly disrespecting Uganda...

Uganda Cranes captain Denis Onyango has retired from international football after over 16 years of service. The 35-year-old confirmed the news in a statement, through his...

By Elvis Senono and Fred Mwambu  Proline pride themselves in a vibrant youth structure that often churns out players to the club’s senior side. But since inception...