The President has given the Uganda cranes that made Uganda Proud in the ongoing AFCON $ 1M (about Shs 3.7 billion) as a token of appreciation for their good performance.

Museveni made the revelation last night while hosting the delegation at state house Entebbe.

He said the money is to be distributed among players and officials.

He however called upon the team to continue training in order to develop stamina and endurance.

The players are expected to return to their respective clubs for pre-season training.

The cranes was crashed out of the tournament by Senegal. 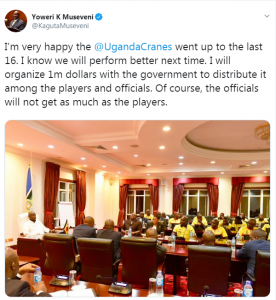 Uganda Cranes XI that played against Senegal in the round of 16 at the AFCON Finals in Egypt. To thank the team the president confirmed in a tweet on his official twitter handle that he would organise a 1 million USD for the Uganda Cranes to distribute it among the players and officials