Eddie Howe pinched Jack Wilshere from under the nose of Alan Pardew in a dramatic Dragons’ Den-style pitch in London on Tuesday night.

Crystal Palace manager Pardew believed he had secured the Arsenal midfielder on a season-long loan following talks with the player but just minutes later Bournemouth manager Howe clinched a deal for Wilshere to crush Pardew’s hopes.

Wilshere was understood to have been impressed by the Palace boss and was ready to sign but when Howe arrived at the same London offices to make his pitch, his hard sell was enough to convince Wilshere, 24, to reject a move to Palace and move to the south coast. 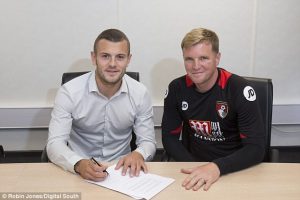 The Brazilian defender rejoins the Premier League outfit two years after leaving for Paris Saint-Germain and has put pen to paper on a three-year contract.

Luiz, who won the Champions League, Europa League and the FA Cup during his first stint at the Blues, is delighted to have returned to west London.

Tottenham finally completed the long-anticipated transfer of Georges-Kevin N’Koudou from Marseille for £9.9million.

The 21-year-old winger has signed a five-year contract, until 2021, at White Hart Lane. 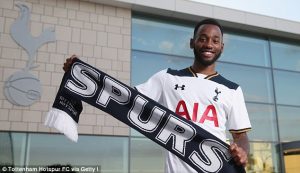 He told West Ham TV: ‘I am really happy to be here in a great club in a great league. 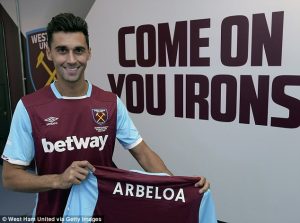 Valencia also completed the season-long loan signing of Eliaquim Mangala after the Manchester City defender arrived in Spain for a medical.

Mangala has fallen out of favour at the Etihad under new manager Pep Guardiola and had been spotted at the La Liga club’s training ground.

His wages had previously been a stumbling block to the deal being completed but negotiations have proved fruitful and Mangala has now finalised his move. 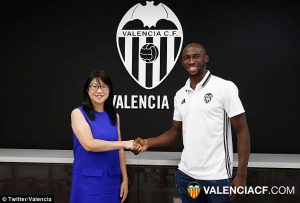 Mario Balotelli completed his medical with French club Nice and has sealed a move from Liverpool.

The controversial Italian striker has been frozen out of Liverpool’s squad by manager Jurgen Klopp and has been training with the youth team this summer.

And after being turned down by the likes of Sassuolo for a summer switch, the 26-year-old is now set to play outside of England and Italy for the first time. 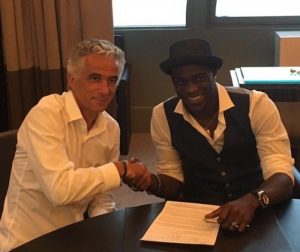 Tottenham dramatically pipped Everton to the £30m signing of Moussa Sissoko from Newcastle in the dying embers of the transfer window.

The deal was confirmed by Sissoko on his Twitter account just two minutes before the 11pm deadline after a day of frenzied pursuit by the two Premier League clubs.

Sissoko, 27, had been desperate for a move away from Newcastle since the club was relegated in May but this long-running saga only reached its frantic conclusion on Wednesday evening. 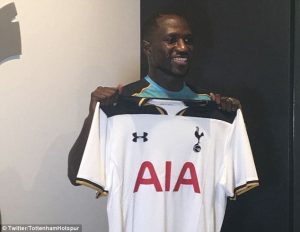 Claudio Ranieri had a £25m bid rejected for the forward on Tuesday but went back to the Portuguese side with an improved offer, which has been accepted.

The Algerian, who scored 27 times last season, passed a medical before the deal was finalised. 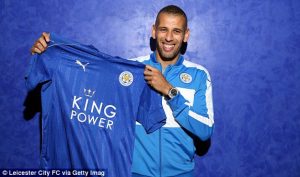 The Uganda Sports Press Association (USPA) has condemned the attack on a New Vision sports journalist, Johnson Were by a rugby player and called for the...