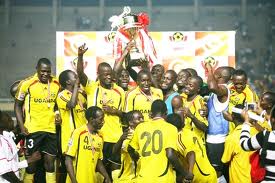 The Uganda Cranes have been voted as the best sports personality by the Uganda Sports Press Association for the month of July unopposed.

The Cranes qualified for their second straight Championship of African Nations after they defeated Tanzania 1-0 and 3-1 away from home and at home respectively.

Athlete Ronald Musagala who is the only Ugandan to qualify for the World Athletes championship also got a mention.

Golfers Deo Akope and Flavia Namakula were also among those recognized.

Tiger Woods suffered serious injuries to both legs as his car flew off the road Tuesday near Los Angeles in a crash he was "very fortunate"...

The 2021 Nile Special 5’s social football league has been postponed to 2022. The brand, which has been responsible for putting together the tournament in all...

By AFP Liverpool rediscovered lost form and seized the initiative against RB Leipzig in the first leg of their Champions League last-16 clash by cruising to...