At a press conference in Kitende earlier on today, the reigning Uganda Premier League champions introduced Mexican, Javier Martinez Espinosa as the man to take charge at Vipers SC starting immediately and into the next season. 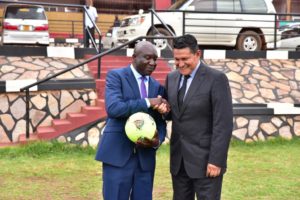 Martinez has signed a two year renewable contract that will see him in Kitende based football club until the close of the 2019/20 season and makes him the 3rd foreign coach to manage Vipers after Da Costa and Nigerian Ambrose Chukuma.

Martinez has managed the U-17 team of Cruz Azul Fútbol Club, a top division side in Mexico and Guatemalan football Club Deportivo Carcha. He also played for Cobán Imperial, a Guatemalan football club based in Cobán, Alta Verapaz. His last coaching role was at Juventus SC in Nicaragua.