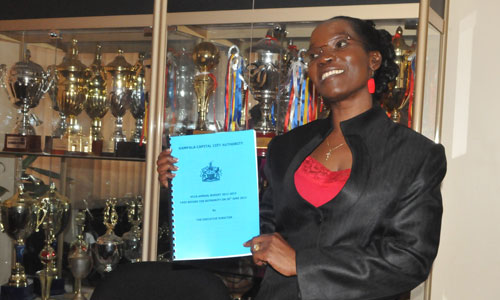 The budget for the Kampala Capital City Authority for the financial year 2012/2013 has finally been presented, showing a reduction in government funding.

Funding from government is to reduce from  Shs101b to Shs 86 billion.

The city Executive Director Jenipher Musisi says the authority expects to raise Shs 61b in local revenues, up from the target of Shs 44.5b that was set this year.

Musisi acknowledges that the target set for revenue collection is too high since the authority failed to hit its mark this year.

She says new measures are being put in place to increase revenue collection including increased sensitization of the public on tax compliance.

The priorities for the financial year include improving efficiency and the image of the institution, implementation of the new staff structure, education and health services.

Under education, Musisi says schools will be constructed and old one renovated in the city divisions excluding the Central Division.

Shs 500m has been set aside for exposure visits, Shs100m for local travel by the division mayors and councilors while Shs 45m will be spent on corporate social responsibility.

The city’s Road Fund has 12.3b shillings, though focus will be on the roads outside the central division.

The other major highlight in the KCCA budget is the fact that all public toilets will now be used free of charge while owners of building are also not allowed to charge users of their toilet facilities.

The authority says imposition of fees on the use of toilet facilities has led to irresponsible disposal of fecal material for those who can’t afford to pay.