by admin
in Health
0

The speaker Kadaga called for provision of safe water and sanitation to communities to prevent tropical diseases. 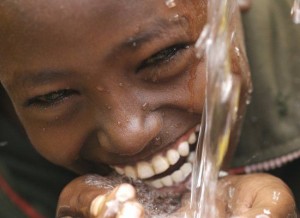 Kadaga made the call while meeting the development partners with the focus on how to tackle trachoma and other non-communicable diseases at parliament.

She however said that the provision of safe water will be made possible with government increasing the budget for the ministry in charge of the same.

She also pointed out the need for a national wide campaign against such diseases and the campaign should be spearheaded by political leaders and the youth including Miss Uganda and Miss Tourism.

Miss Uganda Leah Kalanguka expressed her commitment to have the youth who are victims of the disease mobilized to be available for mass trachoma treatment.

Approximately, 47000 people in Uganda are blind from trachoma and 250,000 people are at risk of becoming blind over the disease.

According to statistics over 900,000 children under 10years have active disease and 10 million people are at risk and the disease is found in 36 districts.

BY Xinhua Local authorities in South Africa have welcomed Wednesday's announcement on the signing of a letter of intent to manufacture the Pfizer-BioNTech COVID-19 vaccines by...

By Xinhua COVID-19 cases and deaths are surging again in the United States as the highly transmissible Delta variant is taking hold and vaccination efforts are...

By Xinhua On the profile of his social media account, Patient Kaloma, a medical researcher based in the northeastern Democratic Republic of the Congo (DRC), is...

By Ivan Ssenabulya The World Health Organization has signed an agreement of financial support worth Shs 8 billion, with the Norwegian ministry of foreign affairs to...

By CAROLINE AYUGI and Tobbias Jolly Owiny  The National Drug Authority (NDA) has ordered Gulu University to cease production of Covilyce-1, herbal medicine that the varsity...

Daily Monitor To Represent Uganda at the Impact Journalism Day