Spice Diana might have held her Siri Regular concert last week but it seems the party is still on as the excitement spilled over into the new week four days after the event.

Fresh from holding what has turned out to be a highly criticized and exciting show, Spice Diana has taken swipe at her haters who reportedly punched holes in what she described as a “successful show.”

The singer, real name Diana Hajara Namukwaya has shared a statement on her Snapchat account explaining that her concert, which is her fourth show, was too big and expensive for haters to handle before directing them to her YouTube channel if they “want perfection.”

Spice was hitting back at haters who slammed her vocal ability and performance at her January 13th concert.
In her defence, the Siri Regular singer says she can’t be Celine Dion, if that’s what her online fans were expecting.

“Did you expect me to sing like Celine Dion? I’m Spice Diana, or you expected a semi-live like your other…” Spice’s Snapchat statement reads in part.

Spice Diana, who also held successful regional concerts in Mukono and other parts has further confessed how she is not bothered by naysayers.

However, the main concert, which was held last Friday at Lugogo Cricket Oval has left tongues wagging with many fans complaining over the poor sound system and sitting arrangement despite winning people’s hearts due to the futuristic big-budget stage.

Some fans in the VIP section said they could barely see the performers as they were not allowed to stand up.

A one Batt Badru has taken to Twitter to question whether the singer actually voiced the songs on her YouTube after she directed fans to get her perfect music from video sharing platform, YouTube.

“Sending people onto YouTube to check out your perfect music means you’re not the one who voiced those songs if you can’t perform them live,” Badru tweeted.

Check out her full statement and reactions below; 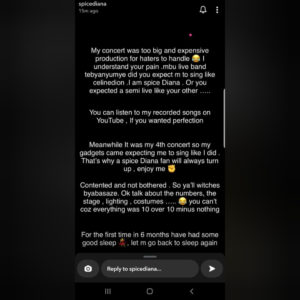 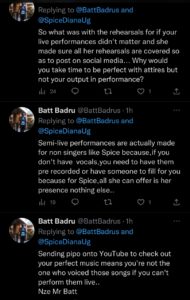 Unregistered artistes will not benefit from royalties – UPRS

The Uganda Performing Rights Society (UPRS) says it will not payout any royalty to artistes who have adamantly refused to register as members of the society....

NIRA to employ over 11,000 temporary staff in ID renewal exercise