He might be Uganda’s ugliest man but Sebabi, real name Godfrey Baguma is a ladies’ man. In fact he has just fathered another child, a pretty bouncing baby girl.

Sebabi, 47, got married to Kate Namanda, 30, in 2013 and she has given birth to his eighth child! Yes, Sebabi’s brood now stands at eight and counting. 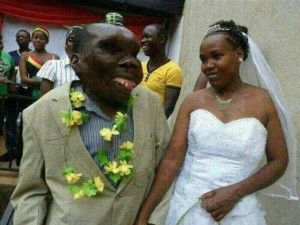 Some of his children are from his first wife whom he parted with after seven years of living together. “I caught her cheating with another man and I assured her our relationship was over.”

“She liked me because of my money, but people kept telling her that she could do better, so she started eloping with another man,” he says.

Sebabi then met Namanda who was 18 by then, through his aunt who played go between. “I stayed with her four years before her people knew where she was. I didn’t want them to see me until we had a child because they would definitely advise her to leave me,” he recalls.

“She left me when she was six months pregnant but I think she later accepted her fate because she came back two months later,” he recounts.

“I told her that I didn’t choose to look the way I do and that if she feels I am a burden, she is free to live me,” he narrates.

Lucky for him, she chose to stay and in 2013 they held a wedding ceremony that put his hometown Kyazanga, in Lwengo District at a standstill. Guests at the wedding had to pay Shs4,000 to attend the reception and see the woman Sebabi got married to.

Sebabi is a former cobbler who now uses his unique features to earn a living. He appears at events as Uganda’s Ugliest Man just for people to see him, but he took it a step further by joining Amarula Family and he even started singing, because he doesn’t want to go on stage for people to just stare at him.

By Gabriel Buule The last time Nyege Nyege happened in 2019, Kenyans were the talk of the town.  Then, a team of revellers from Kenya proved...

Tooro Kingdom Princess, Ruth Komuntale and her husband, Phil Farquharson have welcomed a bouncing baby boy. The good news was announced by her brother, King Oyo...

Ugandan Artists including Spice Diana, Sheebah Kalungi, and Fik Fameica among others are set to benefit from an offer from Mtn –Uganda where the company has...

Muslims Cautioned on Things That Can Spoil Ramadan