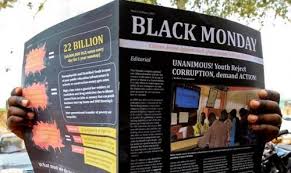 One of the black Monday activists has been arrested.

Job Kiija of the NGO Forum was this morning leading a team that was distributing leaflets containing anti-corruption messages along Kafumbe Mukasa road in downtown Kampala.

He has now been taken to Old Kampala Police Station.

Civil society organizations had taken their Black Monday campaign to St Balikuddembe market. The arrest however came as a surprise.

Unlike earlier campaigns that have often been synonymous with chaos and running battles with the police, this time the anti-corruption activists were freely going about their business until the vendors started demanding for translated versions.

Every first Monday of the month is dedicated to peaceful actions that high light the burden and dangers of corruption.

The Black Monday Movement was formed by a group of civil society organizations to pressure government to take action against the corrupt.