The Kyadondo East MP Robert Kyagulanyi known to many as Bobi Wine has asked people not to boycott any of the Uganda crane matches at Namboole stadium following the cancellation of his Kyarenga album launch that was due on s 9th November.

The show was canceled after FUFA wrote a letter to the management of Namboole contesting this event saying the stadium was going to host an international match between Uganda and Cape Verde on 17th November. 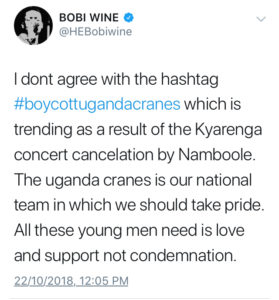 This angered many Ugandans and have since vowed to boycott Uganda cranes matches with social media users starting up the trending hashtag #boycottugandacranes.

However the Kyarenga star has called for calm and asked Ugandans to keep the love and support the Uganda cranes team.

He says the national team should be the pride