A group of youth have stormed parliament with a coffin condemning the manner parliament is handling the murder and kidnap of women and children which has hit the country currently.

The group led by lutta Ferdinand dropped a coffin at Parliament to show their dissatisfaction and accusing members of Parliament for neglecting the issues affecting the country. 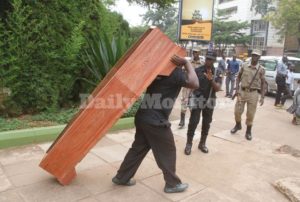 Police swung into the action and arrested two including lutta and Achom Beckie.

The clime that Over 20 women and children have been kidnapped for ransom while others murdered in the period of three months, but parliament is busy discussing politics.

However recently the committee of defense and internal affairs quizzed the new police commander Okoth Ochola for failure to reduce these kidnaps.

By Juliet Nalwooga The German-Uganda Development Cooperation (GIZ), under its natures program, has partnered with Youth Go Green Uganda to empower young people to manage and...

By Moses Ndhaye The newly installed Archbishop of Kampala Diocese, Paul Ssemogerere has preached peace, unity, and respect for humanity, at his first thanksgiving ceremony. The...

By Benjamin Jumbe The Great Lakes region member states have been challenged to fast-track efforts to combat sexual and gender-based violence. The call has been...

By Moses Ndhaye Parliament has directed the Attorney general Kiryowa Kiwanuka to present to them a report in two weeks’ time on the fate of Kawempe...

By Ritah Kemigisa The leader of opposition in parliament Mathias Mpuuga has called for a law compelling civil servants who have clocked retirement age not...