Double tragedy as the late Justice Karokora’s son passes on

by Faith Amongin
in News
0 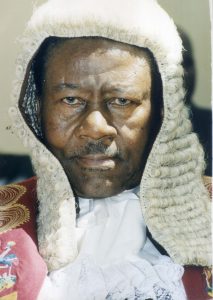 Tragedy has hit the family of the late Supreme Court Justice Alfred N. Karokora twice, in less than a week. Moments after Justice Karokora was laid to rest at Ruharo, Mbarara on Wednesday, the family received news of the death of his son, Albert Mwine Karokora.

Mwine, who died at Mbarara hospital, is said to have passed on due to severe head injuries that he sustained from a motor accident in Mbarara on Wednesday, August 28.  He was the late Justice Karokora’s youngest son and second last born. Burial is scheduled for today in Mbarara.

Justice Karokora retired from the Judiciary in 2006 as a Supreme Court jurist aged 70. He died aged 83.

The hearing of inciting violence case against Kawempe North Member of Parliament, Muhammad Ssegirinya has flopped today due to absence of the trial magistrate. The case...

By Allan Chekwech  Kenya’s president William Samoei Ruto will be in Uganda tomorrow afternoon ahead of the country’s 60th Independence Anniversary, his team has confirmed. The...

A 30-year-old man has been sentenced to 28 years in jail for defiling his 4-year-old biological daughter. This is after he pleaded guilty before Bushenyi High...

By Joel Kaguta Police in Kasese last evening blocked the Forum for Democratic Change party delegation from delivering relief items to the mudslide victims at Kasika...

Former Uganda Airlines boss to defend self in court today

The defence hearing of a case against former Uganda Airlines boss, Cornwell Muleya is expected to begin today at Buganda Road Court. Muleya who is out...