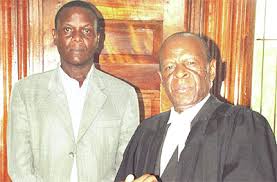 The court of appeal has upheld a life imprisonment sentence to businessman Kato Kajubi.

The judges also say that a telephone print-out from MTN shows that Kajubi was in constant contact with Umar Kateregga, the traditional healer who confessed to have sacrificed the 13 year old boy Joseph Kasirye.

They concluded that Kajubi did not deserve any lighter sentence and should serve the life sentence handed to him.