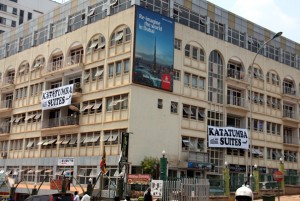 Days after the Pakistani Consul to Uganda His Excellency Bonny Katatumba regained ownership of Blacklines House following a protracted court battle, another order has been issued to have him evicted.

Blacklines House located in the city center has been under contention between Katatumba and city businessman Mukesh Shukla.

Court bailiffs have ordered that the building be closed but no property has been removed.

The police are heavily deployed around the building that also houses the Consulate of Pakistan.

According to the court order signed by Irene Akankwasa on February 10, 2014, the one earlier served on February 6 directing Katatumba to regain ownership of the building, was given out erroneously.

Addressing the media earlier, Katatumba  said the second order was fake and could not override the first one issued by the High Court judge and vowed to protect his property.

Meanwhile one person has been arrested as police evicted Pakistan Consulate Bonny Katatamba from a building along Colville Street.

Central police station DPC, Denis Namuwooza says the arrested is a security guard who fired in the air as the eviction process went on.

US reviews relations with Uganda

University admissions for every semester