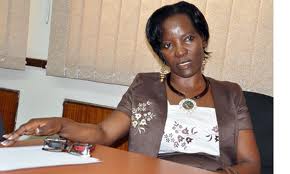 Kampala Capital City Authority has taken over Centenary Park as it moves to save the green belt. This comes about three days before the expiry of the 90 days that were given to the tenants by the city authority to vacate the park.

However, the authority deputy spokesperson Robert Kalumba says this period has already expired. He adds that after taking full control of the park, they are now ready to hold talks with Nalongo Estates to forge a way forward on its management.

The move also comes amid protests by the tenants against the planned demolition of what KCCA calls illegal structures.

According to KFM’s Ali Mivule, Anti riot police is heavily deployed at the park and graders have already demolished the fence and some barricades.

A short while ago, there was a scuffle between the police and the Mayor Kampala central Godfrey Nyakana and his wife Sarah Kizito who is also the proprietor of Nalongo Estates Ltd. Three of Nyakaana’s men have been arrested.

The tenants have opposed the move asking to be allowed to continue with their businesses until the tenancy agreement they signed with the managers of the park expires. The agreement the tenants signed with Nalongo Estates Ltd is expected to expire in four years. Over 20 buildings, most of them restaurants are likely to be affected in the exercise.

In May 2006, KCC entered into a management agreement with the Nalongo Estates to develop, use and maintain Centenary Park as a recreational park and bridal garden.

On June 28th 2012, KCCA executive director Jennifer Musisi wrote to Sarah Kizito, the proprietor of Nalongo Estates Ltd, asking them to vacate the area within three months for breaching the agreement not to erect permanent structures in the area.

The park, measuring about three acres, is one of the few remaining green belts in Kampala, after similar plots were either redeveloped or allocated for private investments. Meanwhile, At the new taxi park, the situation is not any different.

The KCCA enforcement officers have sealed of the park to allow renovation works to start. This is also being done amid protests from both the taxi drivers and the vendors who have been operating in the park.

Earlier traffic flow had been affected and the traders had been denied access to their stalls to pick up their properties.