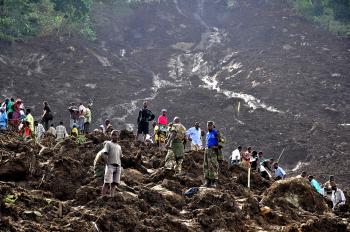 Nine people have been rushed to hospital in critical condition after landslides hit Buduuda district once again.

The landslides occurred at Nasala village in Bulukyeke Sub County.

According to the Assistant Director Disaster Management at the Uganda Red Cross society, Kevin Nabuduwa, 15 homes have been covered by the soils.

It is still not clear how many people are trapped in there.

Another 29houses around the affected house are at risk of suffering the same.

A team of Red Cross officers and the police are already at the scene to help rescue those affected.

The landslides that occurred at around 2pm are not hitting this area for the first time with losses suffered in the earlier disasters.

Frantic rescue efforts on in Bududa