A man who claims to have been tortured by police during last month’s Kyadondo East MP by-election has gone to the High Court seeking compensation for his violated rights.

In his petition, Patrick Sande Byamukama says after casting his vote at Kasangati polling station on June 29th 2017, he was assaulted by 3 police officers who grabbed his wallet and phone before arresting and detaining him for 5 days at Kira division police station.

He also claims that while in custody he was kept incommunicado, denied water and food until July 3rd when he was released on police bond. 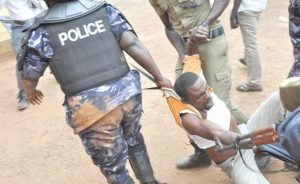 Byamukama says he now experiences severe pain in one of his kidneys while passing urine as a result of the said torture.

Through his lawyer Ladislous Rwakafuuzi, Byamukama also wants a court order enabling him to identify his tormentors so that they can be held individually responsible.

The deputy registrar Sarah Langa has signed summons requiring the Attorney General to file a defence on behalf of the accused police officers within 15 days.