Zimbabwe’s President Robert Mugabe last evening surprisingly resigned after a stand off with with his own party Zanu PF and the Army.
A letter from Mr Mugabe said that the decision was voluntary and that he had made it to allow a smooth transition of power.
The surprise announcement halted an impeachment hearing that had begun against him.
Lawmakers roared in jubilation and people have begun celebrating in the streets.

The surprise announcement came as lawmakers debated an impeachment motion against Mr Mugabe in a joint sitting of parliament.

Mr Mugabe had previously refused to resign despite last week’s military takeover, and days of protests.

He has been in power since independence in 1980. 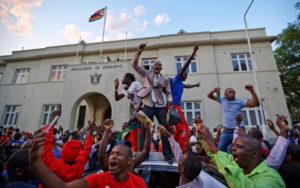