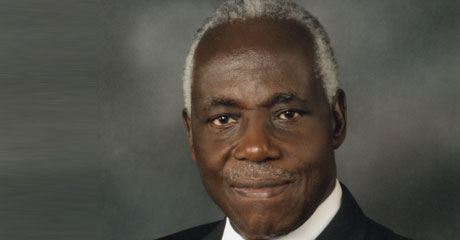 Government has sent out condolences to the family of fallen businessman, James Mulwana.

Mulwana died this morning at Nakasero Hospital due to stomach complications.

Government spokesman, Mary Karooro Okurut, describes the deceased as a genuine industrialist who contributed to the development of Uganda and Africa as a whole.

Karooro says that Mulwana was a true patriot, and will be remembered for his extreme modesty, discipline, dedication, hard work, humility and as a man who loved peace.

Trade Minister Amelia Kyambadde says he was a great entrepreneur who will be missed dearly.

The Buganda Kingdom spokesperson Charles Peter Mayega described Mulwana as a strong pillar to the  development of the Buganda  kingdom and the entire  country.

Mayega says the deceased will be remembered for his great humility and his desire for his country and everybody around him to develop.

Meanwhile the Nabagereka of Buganda Lady Sylvia Nagginda has visited the deceased’s home in Kansanga a Kampala suburb and paid tribute to the fallen businessman.

The Speaker of Parliament Rebecca Kadaga is also among the multitude of mourners at Kansanga.

Meanwhile, the deceased is to be laid to rest tomorrow.

This is according to the chairman of the burial arrangements committee, also Executive director Uganda Manufacturers association Ssebaggala Kigozi.

According to the program released by the family sitting at his Kansanga home, burial will be at 2.00 pm preceded by a requiem service to be held at his home at Masiba along Hoima road.

Mulwana died at the age of 77 and is survived by a wife and three children.

At the time of his death Mulwana was an accomplished business man and chairman of the UMA advisory committee among other responsibilities in the corporate world.

May his soul rest in eternal peace.

CEC at crossroads over Speaker vote