Barcelona produced the stand-out result of the night as Lionel Messi struck a hat-trick in a 7-0 win over Celtic,

In their two full seasons together at the Nou Camp, Messi, Neymar and Suarez have scored a combined 253 goals and assisted 120 more.

Those numbers are rising quickly in the early weeks of this season – 266 goals and 128 assists – and in this latest masterclass, Messi got a hat-trick and Neymar a goal and four assists.

This was Celtic’s heaviest ever defeat in Europe 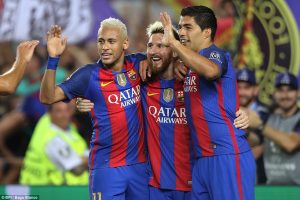 while the other fixture in Group C between Manchester City and Borussia Monchengladbach has been rescheduled for Wednesday due to adverse weather. 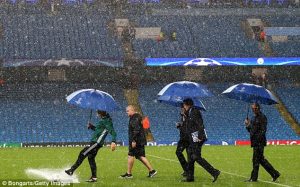 In Group B, Anderson Talisca produced a stunning 93rd-minute free-kick to earn Besiktas a 1-1 draw against his parent club Benfica.

Napoli came from behind as summer signing Arkadiusz Milik struck twice in nine minutes to overhaul Dynamo Kiev’s lead before half-time in Ukraine.

Bulgarian side Ludogorets – in the Champions League group stage for the second time – faced 14 shots at Basel but left Switzerland with a 1-1 draw,

Alexis Sanchez salvaged a point for Arsenal from their limp Champions League opener at Paris St-Germain.

Edinson Cavani glanced PSG ahead after 42 seconds and should have had a hat-trick before half-time, firing wide after rounding David Ospina before slipping to fluff a simple finish.

Sanchez rifled in the rebound from Arsenal’s first shot on target.

Alex Iwobi might have had a late Arsenal winner before Olivier Giroud and PSG’s Marco Verratti were sent off. 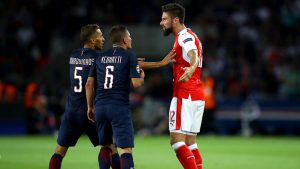 Joshua Kimmich stabbed in and quickly added a header as Bayern boss Carlo Ancelotti became the first man to manage seven clubs in the competition.