Maradona goes crazy as Nigeria is dumped by Messi, Croatia, Denmark & France all through

Marcos Rojo stubbed the dagger into Nigerian hearts and scored a fine late volley to send Argentina through to the last 16 of the 2018 World Cup with a dramatic victory over Nigeria in St Petersburg.

A lacklustre Argentina were on the verge of an embarrassing exit, before Manchester United defender Rojo surged into the area to place Gabriel Mercado’s cross into the bottom corner.

10 Ugandan golfers to participate in the Magical Kenya Open

FUFA releases list for male player of the year category

Lionel Messi had scored a brilliant opener, Victor Moses equalised after a Javier Mascherano error that ended up being rewarded as a penalty to Nigeria.

Given Messi will be 35 during the next World Cup in Qatar in 2022, victory here has at least staved off a miserable end to what could well be his last chance to win the tournament.

In the other game in group D, Iceland failed in their attempt to reach the World Cup knockout stages for the first time as Croatia beat them by two goals to one to secured a late win to top Group D on maximum points.

Croatia will now face Denmark in the last 16 on Sunday, while Argentina will play France on Saturday.

A draw was good enough to see a much-changed French side top Group C, while Denmark knew a point would be enough for them too, even if Australia beat Peru.

That scenario resulted in a game that lacked ambition, chances and any element of danger, not helped by news midway through the first half that Peru were winning in Sochi.

Peru recorded their first win at a World Cup finals since 1978 as they beat Australia in the last match of the tournament for both sides.

Australia needed to defeat already-eliminated Peru and hope France beat Denmark in order to reach the last 16, but the South Americans went ahead with a fine, low 15-yard volley from Andre Carrillo.

Peru captain Paolo Guerrero, only able to play in the tournament after a tribunal overturned a 14-month drug ban, sealed the victory when he spun and shot into the far corner.

Peru had played eight World Cup finals matches without a win since they beat Iran 4-1 on 11 June, 1978, and this victory was only the fifth in their history. 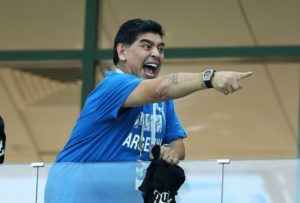 Diego Maradona goes through rollercoaster of emotions during Argentina win

Fears for the health of Argentina’s legendary No 10 Diego Maradona have eased after he had appeared to collapse into a chair after a night of bizarre behavior while watching the national team’s qualification for the round of 16.

The 57-year-old was seen being helped from his seat in the stadium before collapsing into a chair. He was immediately attended to by Russian paramedics but despite reports that he had been taken to hospital, Maradona left the stadium himself. Low blood pressure is thought to have caused the momentary scare.

10 Ugandan golfers to participate in the Magical Kenya Open

FUFA releases list for male player of the year category

By Lukeman Mutesasira The organizing committee of the Airtel FUFA Awards has released a shortlist for the male player of the year category. The list includes...

By Lukeman Mutesasira There has been a dramatic turn of events hours after the silverbacks withdrew from taking part in the Basketball world cup qualifiers due...

The Uganda Cranes ended their World Cup qualification campaign with a 1-0 loss to Mali at the Adrar stadium in Agadir, Morocco last evening. Khalifa Coulibaly...