France international Kante has enjoyed an incredible rise in English football after joining Leicester City from Caen in 2015.

Having played a key role in Leicester’s remarkable Premier League title success last term, the midfielder has continued to star at Stamford Bridge for this season’s leaders, Chelsea.

He secured the most votes from his peers, seeing off competition from team-mate Eden Hazard plus Tottenham’s Harry Kane, Zlatan Ibrahimovic of Manchester United, Everton’s Romelu Lukaku and Alexis Sanchez of Arsenal.

He said: ‘To be chosen by the players to be player of the year means a lot to me.

‘It means the world to be chosen and it’s been two beautiful seasons, one with Leicester, and we are in good form with Chelsea. To be player of the year, it’s a great honour.’

Alli  won young player of the year He becomes the fourth player to be named Young Player of the Year in successive years, after Ryan Giggs, Robbie Fowler and Wayne Rooney. 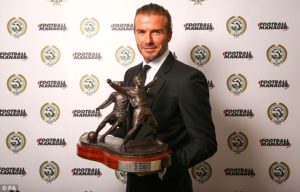 Beckham, who won 115 England caps and starred at club level for Manchester United, followed ex-Red Devils team-mate Ryan Giggs in winning the Merit prize. He also received the prize alongside his ‘Class of 92’ United team-mates in 2013.

Three arrested in possession of pangolins worth 6 million

MP Mubarak Munyagwa out of prison