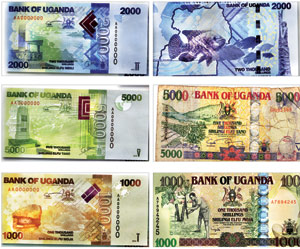 The Bank of Uganda has recalled all the 1987 currency notes.

Kasekende says commercial banks are required to cease issuing of the said notes with immediate effect.

He says the withdrawal process is expected to continue until March 30th 2013, after which the affected currency notes will no longer be acceptable as legal tender.

He explains that between March 30th and May 30th 2013 commercial banks will exchange the old currency notes at full face value.

He adds though, that beyond that date, the notes will be exchanged at a cost yet to be revealed.

Kasekende also reveals that the affected notes constitute 4% of the total amount in circulation.

This means the amount stands at 93bn out of the over 2.4 trillion shillings.

The move follows numerous complaints over the continued use of two currency notes alongside each other, which some economists had described as detrimental to the economy.