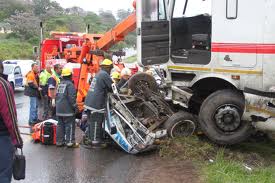 Three people have died in a motor accident that occurred this morning at Nakasongola along the Kampala-Gulu highway.

The trio was returning to Kampala from Gulu, when the Toyota Premio Registration number UAM 453 R that they were travelling in rammed into a stationary truck on the road side.

The Police spokesperson Savanna Region Lameck Kigozi says they have not yet established why the driver rammed into the truck, yet it had signs showing it had mechanical faults.

The driver who has been identified as Simon Peter Okumu, died on the way to hospital, while his wife and their daughter died on the spot.

The car had six passengers, the three who were behind survived with serious injuries, and were rushed to Nakasongola and Kiwoko hospitals.

Muyingo quizzed over Ugandan children crossing to Kenya for studies