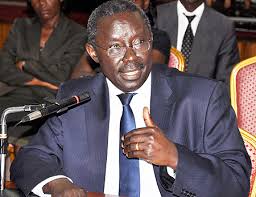 The Attorney General has challenged the application filed by lord mayor Erias Lukwago on grounds of procedure.

The Attorney General says that the application was wrongly filed before the Supreme Court and should be thrown out.

He argues that a ruling by a single court of appeal justice should be challenged by the same court before a panel of three judges.

He also says that Lukwago didn’t file an appeal before the Supreme Court but handed in a notice of appeal in the court of appeal where he was meant to appeal leaving his application in balance.

The Attorney General was represented by Martin Mwambusha.

However Lukwago’s lawyers say that Justice Stephen Kavuma acted out of order when he issued orders on questions that were not in the appeal by the Attorney general.

The five judges led by Esther Kisakye are yet to  rule on the matter.