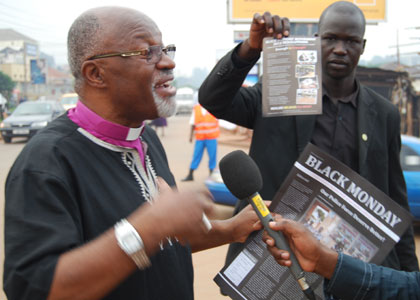 The police have swung into action, arresting several Anti -Corruption activists and students of Makerere University.

Those arrested include Rtd Bishop Zac Niringiye and Emmanuel Kitamirike of the Uganda Youth Network who are being held at Wandegeya and Makarere Police post respectively.

These were taking part in the Black Monday Campaign.

Commanded by Samuel Omala, the Metropolitan Commandant for Kampala North, the police stormed the university while the activists distributed leaflets and newsletters containing anti-corruption messages.

The activists say that this time they have decided to go to the youth because they are the future leaders and so they need to start the fight against corruption from the young people.

The campaign that has been on since late last year is aimed at mounting pressure on the government to curb corruption following rampant cases of abuse of office.