Cranes to miss 2 keepers in Madagascar 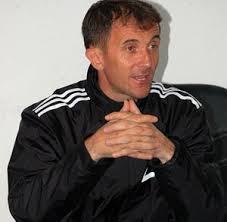 Uganda Cranes coach, Milutin Sedojevich Micho is worried he will miss the services of his two best goal keepers, when the team faces Madagascar.

The Cranes started training this evening at Namboole stadium in the 1st leg of the 2015 AFCON qualification campaign.

However, they will be without Robert Odangkara who got injured during St. George’s match on Tuesday, while Denis Onyango will be on duty at his club BIDVest Wits University in the league cup final with Orlando Pirates.

Addressing the media at FUFA headquarters, Micho said he was optimistic that Odongkara would get better for the second leg in Kampala.

Four of the summoned players including Tonny Mawejje and Yunus Ssentamu are most likely to miss the 1st leg.

EC gets Shs.450m for Luweero by election