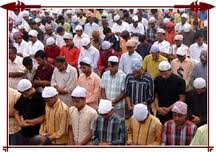 The official program for Eidh Al Adhuha celebrations has been released. Muslims will tomorrow celebrate Eidh Al-Adhuha which is marked by the slaughtering of sacrificial animals.

Prayers at the National mosque in Old Kampala will start at 9am led by the Mufti Sheikh Shaban Ramadhan Mubajje.

The Uganda Muslim Supreme Council spokesperson Hajji Nsereko Mutumba says Muslims are assured of tight security as there will be thorough checking.

He says no vehicle will be allowed near the mosque to provide more space for the believers.

For the muslims planning to slaughter animals for Eidh Al-Adhuha tomorrow, they are advised to choose the very best.

The police have meanwhile instructed all event organizers to ensure maximum security. The police spokesperson for Kampala Metropolitan Ibin Ssenkumbi says all motor vehicles must be strictly kept at least 50m away from places of worship.

The Forum for Democratic Change is asking muslims to preach unity as they celebrate Eid Al- Dhuha tomorrow.

In a statement, the party president Maj. Gen Mugisha Muntu urges muslims to share their sacrifices with the poor as a sign of love and unity.

Muntu has also asked the pilgrims in Mecca to continue praying for the country to overcome the challenges of poverty, disease and corruption among others.