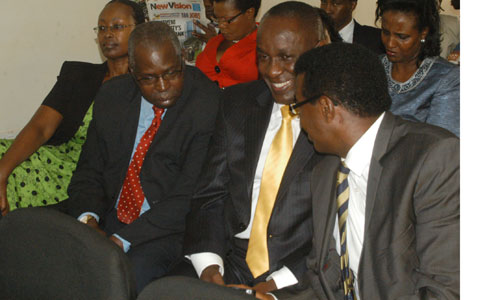 The trial of former health ministers Jim Muhwezi, Mike Mukula and Dr. Alex Kamugisha has kicked off this morning before the Anti-corruption court.

The Director of Public Prosecutions has now taken over the case, previously handled by the Inspectorate of government.

The 3 face charges of abuse of office and alleged embezzlement of 1.6 billion shillings meant for immunization of children.

They face trial together with former state house aide Alice Kaboyo and are alleged to have embezzled funds donated by GAVI.
The trial has started with the Accountant general in the ministry of finance Gustavio Orach taking the stand.

Orach had earlier given his evidence in chief before Buganda Road court where the case was first registered and was today being cross-examined by defense lawyers.

Defense lawyers led by Oscar Kambona have tasked him to explain whether there was any theft reported on the GAVI Funds account in Bank of Uganda.
They also tasked him to explain if the accused had used the money for personal use.
The trial is expected to continue with witnesses presented up to Friday this week.

The case is before Anti-corruption court chief magistrate Irene Akankwasa.