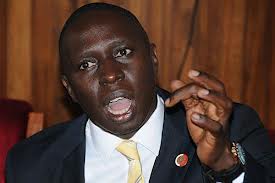 The hearing date for the case of inciting violence against Kampala Central MP Muhammad Nsereko has been set.

The charges relate to the alleged violence that was reported in Butaleja district during the funeral of the former district woman MP Cerinah Nebabda in December last year.

This is after prosecution led by Yoga Oyende informed court that investigations into the matter were complete.

Nsereko had appeared in court this morning for mention of the case flanked by a team of lawyers led by Yunus Kasrivu.