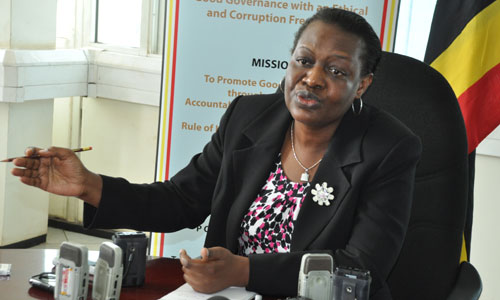 The newly sworn in inspector General of Government, Irene Mulyagonja says the inspectorate will continue to be crippled until it is fully constituted.

Addressing the media this morning, Mulyagonja said that many corruption cases continue to be tried by the Director of Public Prosecutions without much input from the inspectorate because some positions are still vacant.

Mulyagonja says such issues continue to fail the institution calling on the appointing authority to fill the one position still vacant.

Her remarks come at the time when the inspectorate cannot go on with the prosecution of three ministers accused of misappropriating CHOGM Funds.

Sam Kuteesa, Mwesigwa Rukutana and Eng John Nasaasira challenged the powers of the IGG in trying then on the basis of the constitution of the body and court has since ruled that they can not stand trial on evidence from the office of the IGG.

Though the president appointed the IGG, the office can still not function because of the absence of one of the deputies.

Patients flee from hospital over Ebola

Campaigns wind up for Kasese Polls