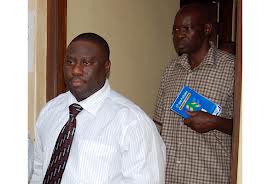 Court has ruled that the interdicted principal accountant in the office of the Prime Minister Geoffrey Kazinda has a case to answer.

The Anti-Corruption court judge David Wangutusi ruled that prosecution had made out a case requiring Kazinda to defend himself on the allegations that he forged Pius Bigirimana’s signature and being in possession of government stores.

Kazinda, who is in detention in Luzira prison, is charged with abuse of office, forgery and making document without authority.

In a separate charge which is yet  to start on January28, Kazinda and his   co- accused Martin Owor commissioner for relief disaster preparedness in prime minister’s office, Beatrice Kezabu assistant resettlement officer and Hussein Katumwa station manager of Total Ntinda I Service Station were charged with embezzlement, false accounting and conspiracy to commit a felony.

The trial judge adjourned the case to 22 March for Kazinda to defend himself on the alleged charges against him, and his intending to produce three witnesses to defend him.