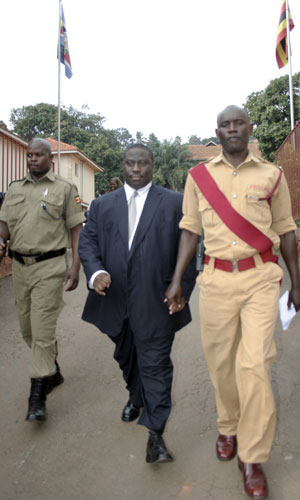 This is after he failed to appear in court this morning for mention of his case.

His lawyer Augustine Idooti said he is on bed rest, recommended by Case Clinic.

Kazinda together with three others were charged with embezzlement, false accounting,
forgery, conspiracy to commit a felony and causing financial loss amounting to
Shs 316.8m.

The state attorney Jane Francis Abodo informed court that investigations into the
matter are complete.

Grade one magistrate in the Anti-Corruption Court Emmanuel Baguma has summoned
Kazinda to appear in court on 8th November for hearing of the case to begin.

Kazinda and his three co-accused persons denied the 29 counts.

His co-accused are John Martin Owor, the commissioner for relief, disaster preparedness and management in the same office, Beatrice Kezabu , assistant resettlement officer in the Premier’s office and Hussein Katumwa, the manager of Total Ntinda service station.

Prosecution alleges that all the suspects between June and July 2010 misappropriated the
money in question, meant for procuring relief food for disaster victims in various districts.