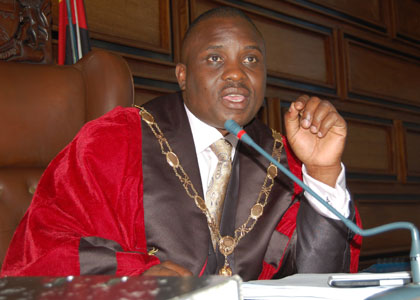 The company accuses KCCA of breaching the contract affecting its operations. The company has made public plans to close shop or else hike the fares charged.

Lukwago says the company is free to close because it has no contract with the authority.

He however warns the company against hiking the fares saying that it is a decision to be made by KCCA.

Meanwhile, Kampala Lord Mayor Elias Lukwago has issued a 2 weeks ultimatum to council to find a solution to the continued absence of the Executive Director Jennifer Musisi from council meetings.

Speaking during a council meeting today, Lukwago said that it’s unfortunate that the executive director continues to absent herself from the meetings with no genuine reason given.

Lukwago says he will be forced to send the councilors on a recess if the trend continues. A committee led by the Deputy Lord Mayor Suleiman Kidandala has also been formed to engage the minister in charge of presidency about the matter.

The Executive director Jennifer Musisi has made it clear that she will not attend any meetings until the minister in charge of Kampala advises on her role in such meetings.

Mukula defends self on fraud accusations